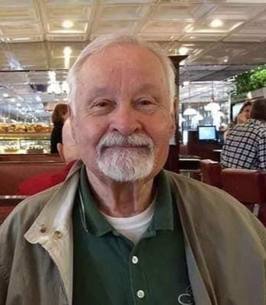 His childhood adventures could have filled books; he loved the sport of baseball, especially the Brooklyn
Dodgers.

Franklin proudly served his country in the U.S. Army Entertainment Division. He was honorably
discharged September 30, 1967.

He attended Hartt School of Music in Connecticut, performed in The Brooklyn Opera and at Carnegie Hall.
He moved north to Orange County, NY, was married and started a family. Franklin is survived by his
daughter, Ingrid Schneider, son Jonathan Schneider, daughter-in-law Robin Harmon Schneider,
grandchildren Riley, Jake and Jessie Rose, as well as Heidi Haupt and her wife, Lauren Hardy Haupt.
Franklin was a man of endless talents, skills and vast ideas. He held many jobs throughout his inspiring
and fascinating life: he was a postal carrier, a designer at International Paper, a performer at The Linden
House in Greenwood Lake, NY. For many years he lent his Bass-Baritone voice in performances of
Handel’s “Messiah” at West Point. In addition to singing with The Hudson Valley Philharmonic, church
choirs and countless weddings, his considerable experience included roles as Tevye in Fiddler on the
Roof, Emil in South Pacific, El Gallo in The Fantasticks, Gaylord in Showboat and Don Quixote in Man of
La Mancha.
While Franklin was a connoisseur of classical music, he was a regular performer at the storied Bodles
Opera House in Chester, NY, with the original Tin Pan Alley Players. He arranged a one man show,
“Tales of the Troubadour” which he showcased around Hudson Valley.

Franklin shared his talent and love of music by coaching voice to people of all ages. He enjoyed art and
nature photography and loved being around children and animals.

He served as the longest running tour guide at the Historic Brotherhood Winery in Washingtonville, NY.

In later years he became a fixture in the Hudson Valley Poetry Circuit. He hosted a series of his own at
Tuscan Café in Warwick, NY. He was a published poet in the region as well as the author of a volume of
poems and sketches “Panning for Goldfish in Streams of Awe” (Lion Autumn Music Publishing, 2016,
NYC).

Franklin loved poetry salons where he spent many fine hours with his friends and fellow writers. He
read his poetry in NYC and in the oldest building in Santa Monica, CA.

Franklin Schneider: The Prince of Silly was a loving father and grandfather. He was an entertainer, a
singer, a dreamer, a straight man, a school bus driver, a tour guide, a philosopher. He was a trusted and
loyal friend to many. He was one of a kind and his mission had always been to make people smile.
Mission accomplished, Dear Prince.